My Experience at DTU Counseling 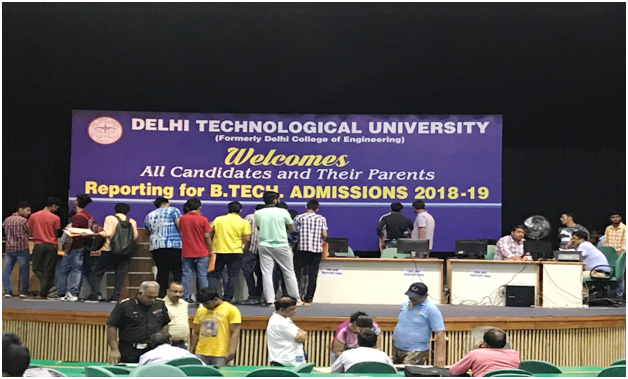 I was tensed. I have already missed the 1st day of counseling and suddenly realized that for general candidates it was the ‘Day 1’ which was allotted. The counseling fees had not been paid. The medical fitness certificate was also not ready. I rushed to my father seeking his advice. He tried calling the helpline nos. mentioned in the site but there was no response and after trying for several times both of us gave up. He suggested that I should go there, talk to the authorities and if they allow me as a general candidate for the counseling, I should pay the fees on the spot.

I was getting the folder with requisite documents ready, when my father probably sensed my tension and informed me that he was going to accompany me. He made the online payment so that I can take a print of the receipt as was mentioned and also called up the local physician informing him that we shall be in his place soon. Somewhat relieved, we started for DTU via the doctor’s chamber.

We reached DTU campus in about same time as was suggested by the Google map though the approach road through the Bawana Transport Area was not very smooth. The campus looked great with wide broad roads and greenery all across. We followed the Admission Counseling hoardings and reach the auditorium.  Security guard

directed us to the help desk where college stuff and some seniors (probably 2nd year students) guided us towards the hall after asking my JEE score.

It was my first counseling as I opted out of the rest of counseling programs (VIT, AMITY etc. etc.) and had no idea of what it would be like and straight away headed towards the queue with my documents and stood beside the last person near the stairs at the right hand corner of the stage. Two seniors on the stage were offering help and guidance to people. Students queued up and were entering the stage from the right and moving out from the left side of the stage.

I kept my fingers crossed hoping that I would be allowed as a general candidate.After waiting in the queue for around 5/7 minutes I realized that in the 1st row of the auditorium there were few officials and staff seated who were actually verifying the documents. One has to go to them first and only after the docs are verified one has to come to the queue. I left the queue and went to their desk. I was given yellow folder where my name and details were to be filled in and all documents to be submitted were supposed to be kept. Here one of them while checking my documents muttered ‘oh you are General category’ before I could respond, my father who I suddenly realized was beside me, said “Yes”. The official calmly said “Ok beta go and stand in the queue”. What a relief it was.

There were around 6 officials in the stage on their respective desks. One of them asked which school I was from and what was my 12th percentage. The entire online counseling process was well managed and took around 45 minutes to complete as we all moved from right side of the stage to left one by one and finally submit the yellow folder at the back stage. The students I came across during the process were of all OBC/SC/ST categories. Probably all belonging to the general category may have come on the Day 1, I thought.

We went for the canteen, had tea and samosa and headed for home wondering If I study here how will I manage the daily commute from South Delhi which would be one and half hour to two hours journey one way. As per the rules DTU hostels were only for outsiders and not for locals.