Bachelor in Design (B.Des) at IIT Delhi may admit students from outside the JEE system

Admissions in regular courses to continue with JEE Scores

A report published by the LiveMint yesterday stated that “Indian Institute of Technology in Delhi (IIT Delhi) has embarked on a mission to become a comprehensive university and even admit students from outside the joint entrance exam system for some new streams of education such as bachelor of design.

The LiveMint quoted Prof. Dr. V Ramgopal Rao, Director, IIT Delhi stating that, “We have also created a department of design. Next year, or this year, if everything goes well, we should be admitting undergraduate students from outside the JEE Advanced examination,”

IIT Delhi Director clarified on twitter : Just to clarify, the “admit students from outside JEE system” comment is for the Bachelors in Design (B.Des) programme which is currently being considered by our Senate. 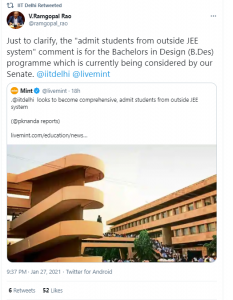 Dr. Ramgopal later mentioned in his tweet that the senate is considering the matter only for the B.Des programme. The Bachelor of Design (B.Des) programme is yet to commence and  there has been no clarity as to when the course may start. Admission criteria and courses of study will also be announced soon.

The Department of Design at IIT Delhi, aims to be a leading department in the world known for quality design education, high impact research and cynosure for creativity and innovation.

“A lot of changes are taking place. The goal is to scale up the IoE (institute of eminence) system and become more comprehensive,” Rao said.

The institution has taken many steps to become more international and increase the international footprint, Rao said. A joint Ph.D programme with the University of Queensland is getting good response and 65 students have joined them this year for the programme, he said.

“We have also significantly increased our interdisciplinary activities on the campus, whether it is between the departments and schools or with even other institutions in Delhi. We have an active collaboration with the National Institute of Immunology (NII), with the All India Institute of Medical Sciences (AIIMS), and various other institutions in Delhi, including the Indian Council for Agricultural Research,” Rao said.

About IIT Delhi:  Established in 1961, was formally inaugurated August 1961 by Prof. Humayun Kabir, Minister of Scientific Research & Cultural Affairs. The institute was later decreed in Institutes of National Importance under the Institutes of Technology Amendment Act, 1963 and accorded the status of a full University with powers to decide its own academic policy, to conduct its own examinations, and to award its own degrees.[4] In 2018 IIT Delhi was also given the status of Institution of Eminence (IoE) by Government of India which granted almost-full autonomy. The primary campus of IIT Delhi is located in Hauz Khas, South Delhi, with Sonipat and Jhajjar being the two satellite campuses. IITD-Jhajjar is funded by the IITD and managed by the Foundation for Innovation and Technology Transfer